The second event on our Ladies of Leisure calendar was the much-anticipated grand opening of West Elm in Orange County’s posh South Coast Plaza. In fact, it was adjacent to the first event. The West Elm store is absolutely amazing – check out this awesome living wall that greets you when you walk in…stunning!

Mrs. Mercado and I took a leisurely stroll around the store, stopping to gawk about every 3.5 seconds at something we’d tell a store attendant to add to our tab if we were true ladies of leisure (humor us, will ya?). I say, it’s quite a fun dialogue to hear us perusing the shelves, convincing each other that mauvish purple is a color all-too-often overlooked and such a color really makes a feminine statement when accenting a masculine brown leather couch, and don’t forget to gently lay a faux-fur throw on that couch while you’re at it – adds a bit of cozy but chic playfulness, don’t you think? Also, did you know that steel blue gray is the new neutral? You would if you would’ve been eavesdropping in our conversations throughout the night.

So take note: anything you want to buy in a steel blue or grey now has our stamp of approval for purchase including this rug (which actually is really nice and sort of muted so it would be easy to change up the furniture and throw pillows around it) or this grayish (though it looked like a steel blue in store) glider and ottoman (even if you don’t have a baby! because, you know, you might someday and then it would come in really handy to have this glider and ottoman in a fabric that’s posh but casual and it wouldn’t matter if this hypotethical someday baby was a boy or a girl because it’s such a neutral color it could go with anything.) See, it’s practically in your online shopping cart already, right?!

My favorite thing about the event was probably the super simple, chic libation served as a signature drink for the night: a Moscow Mule made with Bundaberg Ginger Beer, vodka and a lime. Uh-mazing! Bundaberg Ginger Beer is one of my favorite non-alcoholic drinks and I’d never thought to add some vodka to it (silly me!), although I do know our good friend Cappy loves his ginger ale with tequila (smart man). I’m definitely thinking I need to stock our bar area with a bottle of vodka for nights when the wine just won’t cut it. And speaking of bar shelves, have you seen my new bar cart/console table (former vanity) find from Goodwill?

A torturously long line at the end of the grand opening evening gave all of us partygoers a good 20-30 minutes of standing around contemplating how much lighter our bank accounts would be if we gobbled up everything we were eyeing in the store…I’m talking about furniture but I should also point out that as far as gobbling goes, the food at the event was superb. And served by extremely good looking men (and women) if we may say so ourselves. Seriously. It was starting to get embarrassing as we tried to catch the eyes of the cater staff to mosey on over with their trays (West Elm, of course). Luckily, jaw dropping at their good looks was a bit masked by stuffing our faces with food. Hey, we’re married anyway.

When Mrs. Mercado asked me at the end of the party what I’d like most having seen everything in the store, I responded: a bigger house! But, if there’s one item I keep dreaming of buying it would definitely be this. 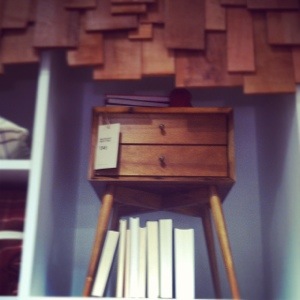 Is there anything on your wish list from West Elm? Have you been to the new store in Orange County?

My friend Mrs. Mercado and I have decided to become ladies of leisure. We’re not, of course; we both work full-time jobs but we have a shared love for home decor and design, party planning, playing hostess, flea market shopping, online shopping, sale scouring, magazine flipping, J. Crew, and watching our husbands play softball. Mrs. Mercado has exquisite taste and though I’m known to splurge when I see deals (anyone else ever gone a little crazy at Target? come on, you know who you are…if that’s not you, I dare you to follow @targetdoesitagain on Instagram and get back to me in a week. Ha!) so as far as shopping partners go, Mrs. Mercado and I balance each other out quite well.

In a new form of recreation, Mrs. Mercado and I have decided to RSVP to local events and gatherings in and around Orange County. I like to think of it as broadening my networking circle! Our first event on the calendar was the first in-store event at Crate & Barrel at South Coast Plaza featuring an expert on glassware from Spiegelau and a representative from LA-based craft brewery, Golden Road Brewing. (When you have a second, check out this awesome article from the LA Times about Meg Gill, the 27-year-old President [yay, you, Meg Gill!] — she’s reportedly the youngest female brewery owner in the world, having co-founded Golden Road with Mohawk Bend owner Tony Yanow. Read it here.)

The event was super fun – a great friend to keep me company, educational (who knew beer would taste so different in different types of glassware?), a lovely charcuterie and cheese spread, a discount on shopping (which I had the willpower to refrain from using), and we met the crazy cool husband and wife team of Adrian Jon Photography (check out their site here). My favorite beer of the night was the limited release Get Up Offa That Brown and we also tried the Golden Road Hefeweizen and the Point the Way IPA (usually I find IPA’s to be too flowery for my liking, but with the right glass and being able to smell the beer before taking a sip and having it hit the palette just so — well I can’t explain how the glass people do it, but you get the point: deliciousness ensues!).

The worst part of the event was perusing the whole store and wanting to buy everything. Especially, the Hunter Trunk, which I’ve had my eye and heart set on for a long time. And it was on sale! Gah! But I slowly, sadly walked away. And, in the spirit of the evening, this Libations Cart from Crate & Barrel is definitely on my wish list but with a price tag way too out of my reach, I’ll be keeping my eye out for a thrifty substitute when Mrs. Mercado and I head to the Flea Market later this month.